Now we must decide whether ‘art of war’ or ‘science of war’ is a better term. Let’s look at the two words. In a science, you are trying to find pure knowledge. In art, you need creative ability.

The line between science and art is the line where pure perception ends, and judgment begins. Allow me to explain, Otter. Perception is that which we take in through our senses, what we see, hear, smell, taste. Judgment is what we think about that stuff, what it means to us.

If we think about it like that, ‘art of war’ is probably the better term. Really, war is neither science nor art. It is part of social life, more like commerce – trade, business – than art, and more like politics than either. It does, in fact, as I have said before, come from politics.

I mention these things because some question whether war really has general laws, and whether those laws can be useful. I think that it is possible that an inquiring mind – the importance of asking questions, young Otter – can make it clearer and can show at least some of its structure to us. This brings the theory into reality.

Today, class, we will be talking about method and routine. There are a few concepts, ideas, that I want to define before having this discussion.

First, law. Law determines action. It is a ‘must.’ A decree or a prohibition is a law. Yes, Badger?

– My Mom said my uncle broke the law and that’s why he had to go to jail.

Er…yes? Well, ah, that is a type of law, so that would be an example we can look at. We have certain laws, and if we break them there are consequences. Sometimes, that means jail. Yes.

Next: principle! A principle is also a sort of law, but not as strict, looser. Some principles are the same for everyone, and some you might only follow yourself. 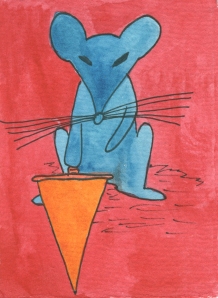 A rule is also similar to a law, but more flexible. A rule can also be a guideline, a shortcut that helps guide our action such as the rules in board games or some math problems. Can anyone think of a rule like that? Who can tell me a rule of, say, geometry? Mouse?

– A triangle always has three sides.

Yes! Very good, Mouse. A triangle always has three sides. We know that rule, so we know when we see a shape with four sides that it is not a triangle.

We also have regulations and directions, which are used more specifically, for smaller things that don’t require general laws or rules.

When we repeat a particular method often enough, it becomes a routine. You probably all have routines you follow when getting ready for class in the morning. Otter, do you do certain things each morning to get ready?

See, Class? Otter washes his face, then eats his breakfast, then brushes his teeth, then gets ready for school. That is his morning routine.

Principles, rules, regulations, and methods will happen often enough that it will be useful to know them, but they will not work in every situation. If the path in front of you is simple and clear, you don’t need to consult a rulebook; you can just follow it.

These guides will be especially useful for those parts of theory that lead to doctrine, so more in the realm of tactics than strategy, as that is the part of the conduct of war most likely to allow for theory to become doctrine.