Work, life, and other art projects have been interfering with my visible progress on this lately, but I am happy to report that I am wrapping up the larger art project that has been taking up a lot of my spare time and things are quieting down at work, so I should be getting back on track. I intend to have a substantive post by the end of the week, but in the meantime, I have a few things to share.

First of all, I met last weekend with my lettering consultant, who helped me think through some ideas about what I want the book title pages to look like. After helping me think through the question of whether I want to keep at least that much of the structure of the original, which: yes. I was of two minds about how I wanted those titles to look, so he is working up drafts of two very different looks, based on absurd notes like “it should feel like it’s from an old-school copy of Grimm’s fairy tales” or “the letters should feel like they are moving forward.” Luckily, we’ve known each other forever, and made art together plenty in the past, so I think he can follow my crazy instructions.

I have also made a few small images, more of those homages to tweeps I did a few posts ago, but this time, I thought it would be fun to post them showing all three main stages of completion: pencils, inks, and color.  Much love to @jasonfritz1 @petulantskeptic, and @jeremyscahill.

Fritz as a fox seemed obvious, because he kind of reminds me of Fantastic Mr. Fox. (In case there is any confusion for some reason, I mean this in the best possible way). 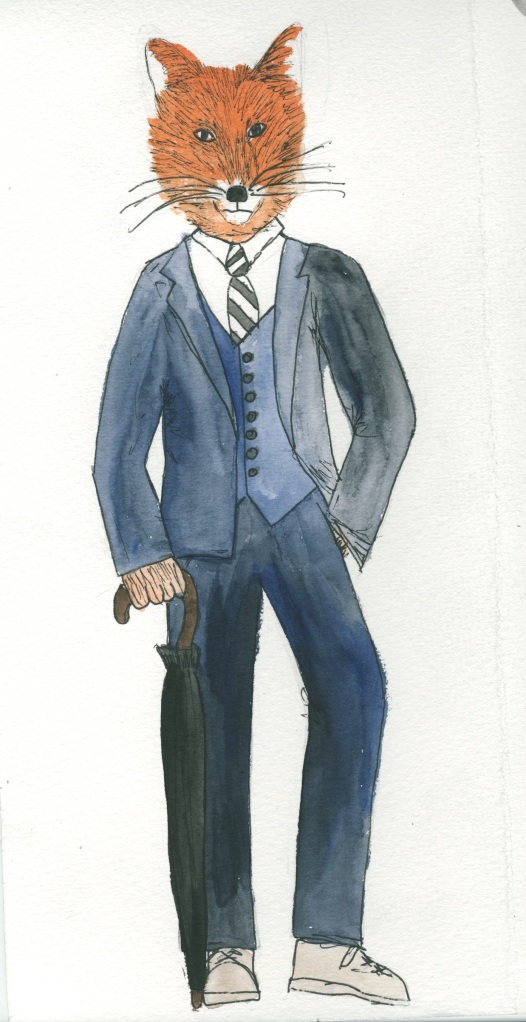 I have been planning on turning petulantskeptic into an otter for some time and it was actually with him in mind that I included an otter in the last post.

During a conversation on Twitter with Scahill a week or two ago, it occurred to me that I should make him a wolverine as a little extra something silly to send to him with his Twitter Fight Club prizes. This idea has sort of tortured me since then, because once I tried, I discovered that I didn’t really know how to draw wolverines and obviously I couldn’t let that stand, so I have drawn about 100 of them since then. I have much improved my wolverine-drawing skills.

2 thoughts on “Letters, Process, Wolverines are Hard to Draw”